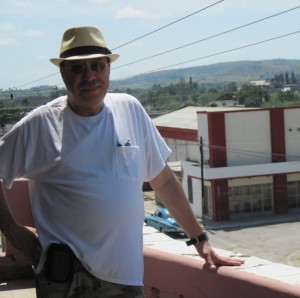 Before his career in film, Joe González worked as a college correspondent for Houghton Mifflin Publishing and as an editor for Magazine Management. The latter was a great training ground for writers such as Mario Puzo, Ernest Tidyman, Bruce J. Friedman, Thomas Chastain as well as the original home of Stan Lee’s Marvel Comics. Joe moved on to film production where he has worked as a bi-lingual writer and script supervisor in features, commercials, music videos, television and industrials since 1980.

Joe is fluent in Spanish and will finish up his Masters in Spanish at Montclair State University, NJ in the fall of 2015. He has also worked as a Spanish coach and translator on commercials. In his capacity as a script person, he has worked with directors such as Barry Levinson, Spike Lee, Tony Goldwyn, Bob Giraldi, Michael Lindsay-Hogg, Patricia Riggen, Larry Robins and numerous others.

Joe has co-written screenplays including Fat Chance (aka Fat Angels) with director Leon Ichaso, which was produced and released by Warner Brothers, Spain, as well as the Saturday Night Live short Pepe Gonzalez: New York City’s Only Living Bullfighter that aired and starred Gilbert Gottfried, Ruben Blades and Elizabeth Peña. He has recently published Where I Came From: My Journey Back to Cuba, an account of his return to his native land and hometown in 2011 as well as a memoir of his childhood experiences. He is currently developing a series of short stories based on that book. Joe is also finishing a screenplay, a psychological drama centered on two single sisters whose peaceful existence is suddenly turned upside down by a mysterious new man in town.

Photo caption: Joe González on the balcony of the Baroja movie theater in his home town of Fomento, Cuba. The red and white building in the background is the Marruco movie theater where Joe saw his first movie.